Candy Crush Saga is known by almost all people around the World who has a Facebook account. Even people who have not played the game have at least an idea about it. Knowing this popularity opportunity, King.com was on the stage with a game called Candy Crush Soda Saga. Well, let’s check what they got.

The difference of this game from the previous game, each department has its own different tasks. This time, instead of just exploding the candies, we need to save the bears trapped in honey combs waiting for us. If we multiply the samples, we try to complete the tasks by raising the bears to the candy string and finding the bears lost in the jellies. 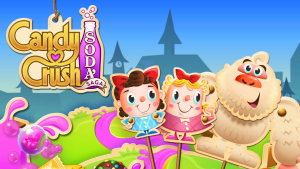 Soda Saga in the game comes from soda bottles and their added features. When you manage to open a bottle of soda in the game, these bottles add the candy sequences in the opposite direction of the movement, so you can do the opposite moves and finish the tasks as they should. Each level has a main task. In our goal is to collect only a bottle of soda, while in another game we only have to blow white chocolates.

Let us also give you a few tips on what we call sugar joining. When we combine 4 identical sugars, the ribbon sugar is obtained and we can eliminate all objects in the column from top to bottom, or from right to left. When we succeed in combining the same color candies as t and l, we are making sugar in pouches and this allows us to detonate all the columns around us.

Candy Crush Soda Saga in-game purchases very fast and practical. In the beginning, 50 gold gifts are given as a gift and then we can make a purchase by credit card. In this way, we are able to get extra reinforcements at levels that we’re forced to get, and we can get life supplements.

The combination of multiple candy combinations that are hard to tell even in most games is also available in the game under the hidden feature name. For example, combining 7 candies is near impossible, but it gives you a stronger bomb than all other bombs.

While most of the gamers play the game by moving the candies right and to the left, without having to run any plans and randomly, you can easily skip the levels by using your intelligence in the game. When you give enough attention to the features of the candy combination, you can pass a level that you cannot pass without losing dozens of moves with a simple bomb in a single move and this gives you a lot of time and a lot of life.