Sonic The Hedgehog, one of the most valuable mascots of the Sega gaming company, has been very popular since the early 90s. There are a lot of movies, games and animations about the adventures of a hedgehog with super speed and his other super-talented friends. Many Sonic fans have done a lot of work without getting permission from Sega and Sega has hired many of them instead of reacting to them.

In fact, the basis of the creation of the Sonic character is the ongoing struggle between Sega and Nintendo. As the Super Mario brothers make a great sound, the Sega company needs a hero of its own, and as a result of long-lasting work, our cute blue hedgehog Sonic appears. 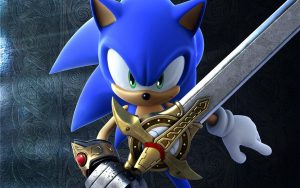 Even though it was the beginning of the 90s, Sega created a very colorful and entertaining game on a 2-dimensional platform and continues to collect the fruits of this character even today. One of the most important factors in the success of the Sonic character is his attitude. In addition to his superpowers, he has a super-charisma and is always at the forefront.

In addition, thanks to the accelerated and increased level of excitement, the players managed to pull the brothers out of the struggle to rescue the princess. After 1991, the almost legendary Sonic the Hedgehog has appeared on multiple platforms and even has a film that will be released this year.

Sonic, who can almost reach the speed of sound, lives in a peaceful area called the South Island. But one day, the animals living on the island slowly disappear and Sonic is suspicious. As a result of his research he learns that this is due to a bad scientist known as Doctor Robotnik. The aim of this villain is to experiment on the animals he catches, turn them into robots and turn them into their servants.

Thanks to these slaves he will take over the world and establish a country called Robotnik Land, but he has never met Sonic. Sonic must stop Doctor Robotnik and rescue his friends. He must also seize the chaos emerald of the doctor and put an end to this evil.

Both in the game world, as well as in cartoons and animations, the Sonic character is not only about being fast. His courage, his wit and his dedication to his friends are the factors that make him go. In Sonic games, our aim is to collect power rings and fight against obstacles by making a quick run on a 2 dimensional plane.

Generally, the more rings we collect, the stronger the more we kill the creatures and the end of the monsters mostly robots made by Doctor Robotnik. When we hit an obstacle, we lose some of the power rings that we collect in the game instead of dying, and we continue to run where we left off. But, of course, this is also a factor with boundaries.

139 thoughts on “Sonic The Hedgehog New Tab for Google Chrome”