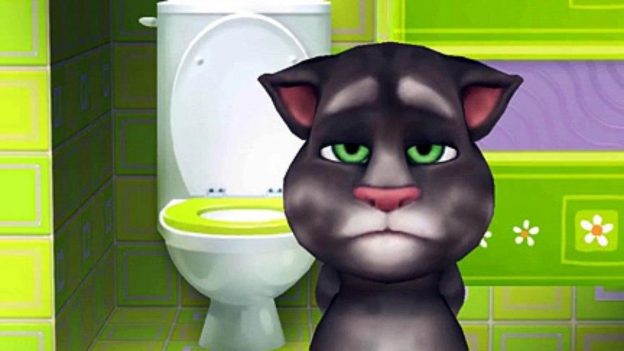 My Talking Tom is a digital pet application developed by Outfit7 in November 2013. In the game with similar features with Pou, Talking Tom is like a pet for us. The game, which gained a great reputation in a short period of time, became an example of many games in the continuation.

The object of the game is to look for an anthropomorphic pup named Tom. (can be optionally renamed by the player). The player is invited to care for “Tom” and help to fully grow a baby kitten for a kitten. This happens by feeding him, taking him to the bathroom, playing mini-games, and interacting with him in different ways, like sleeping in bed when he’s tired. Our cat Tom is one of the cutest cats you’ve ever seen.
Tom can repeat words spoken into the device’s microphone for up to 25 seconds using a speech synthesizer. Tom has the option of visiting Tom’s friends or traveling the world by logging in to in-app purchases, in-game currency or Facebook. A variety of different outfits, skins and accessories can be purchased to customize and personalize Tom using the in-game currency.

Talking Tom is one of the most famous video games and has become the most famous cat in the world with the spread of smartphones. It is the perfect tool for children and adults. For this reason, it became popular in a very short time and spread around the world.

Talking Tom Cat is an application you have used for a long time. The new app Talking Tom Cat 2 will be more fun. Talking Tom Cat, working on devices with a microphone, records your voice and transmits it to you through the cat’s mouth. A simple logic application, this cute cat repeats what you say is fun.

The application is not limited to that, when you click on the icons you see on the screen, Ben The Dog, Tom Cat’e taunt you will see. Sometimes the situation will change. You can either beat, tease or love Tom Cat with your finger taps.