Soul Eater, which was published between 2008 and 2009, has been a very famous series. The character, who also creates the name of the anime, is a cool anime, as Soul Eater calls it.

The subject of Soul Eater is in a school that produces weapon technicians. The school is headed by Shinigami (God of Death). Don’t look at his name as a shinigami, he’s a very warm being. Each of the students in this school is a technician and they all have guns. In guns, they are human beings, just like technicians, but they have the ability to turn into weapons during the war. 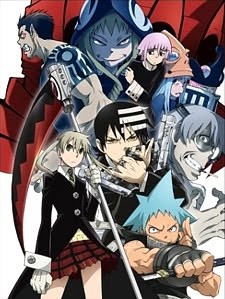 The aim of the technicians is to collect 99 kishin spirit (evil spirit) and 1 witch spirit. The technician’s weapon will be turned into a Death Scythe. The death scythe is the most powerful weapon and can be used by Shinigami. The story actually has three main characters. These are Maka, Black Star and Kid. Maka’s helper Soul, Black Star’s helper Tsubaki and Kid’s helper Elizabeth and Patricia’s adventure of the series contains plenty of action. They all have the same goal, so that they can turn their weapons into a death scythe.

These main characters are introduced in the first three sections of the anime. In the first part we see Maka and Soul, in the second part Black Star and Tsubaki, and in the third part Kid and his partners Liz and Patty. In this way, we recognize the characters. Although the main subject of the series is to gather the souls of Kishin, this subject changes completely in the following chapters. So much so that after a while no one is interested in this kishin spirit gathering event. Don’t look at what I mean, you’re actually eating the souls of the people they beat. In this way, 99 kishin souls and 1 witch soul-eating weapon becomes the scythe of death. The number of death scythes is very small and they have to gather the souls from the beginning in the slightest mistake.

But as I said, although the main issue is to gather souls, this topic is completely changing. With the emergence of Asura, the origin of evil, anime becomes completely different, and fear and madness surround the world. At this point, our heroes show themselves and the whole school unites and starts a struggle against evil.

Character design is very successful especially in anime each character has a unique behavior and you can get used to the characters in a short time. To put it briefly, Maka is an ambitious and successful student, but she is not strong enough, and from time to time she becomes a victim of her own ambition. Black Star is a totally cool and smug character. He also has a utopian desire. Kid is definitely one of the most original of the animations I’ve seen. He is a patient of symmetry and this disease is plagued by wars.

Kid, who has two sisters as a partner, pays attention to symmetry especially during the pose before the war and of course during symmetry. Another feature of the Kid is that Shinigami is the son, and when it comes to weapons, Soul is not the most prominent character in the series, even though he is the person named after the animator.

Tsubasaki is a Black Star’s partner and has a quiet personality, and it must be really appreciated to be a Black Star’s gun because it must be difficult to be with a man who praises himself 24 hours a day., Liz is one of the Kid’s two partners and is dark, bleak He doesn’t like the atmosphere and is very afraid of ghost stories. He is a pure partner you know and he is one of the characters who can be said to laugh and weird in the most unexpected places.