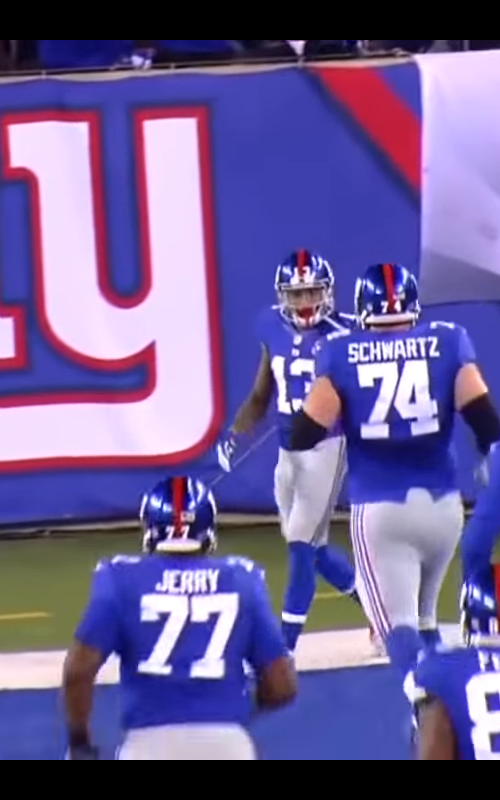 The history and tradition of the New York Giants is linked to pro football itself for one might have perished without the other in the early days of the National Football League. The late Tim Mara, now a member of the Pro Football Hall of Fame, purchased a franchise for $500 in 1925 and before the Giants’ first season had ended, he had invested another $25,000 to keep the franchise alive. A team in New York was thus assured. To a young NFL that was seeking national media and fan attendance, a team in the nation’s largest city was an absolute must.

Taylor_Lawrence_Team_ActionThe value of New York exposure was clearly demonstrated in December of the first season when more than 70,000 turned out at the Polo Grounds to see the Giants play the Chicago Bears, who had just signed Red Grange, the most famous pro football player of the 1920s.

The very next season (1926), Grange and his agent formed a rival American Football League and placed their flagship team, the Yankees, in New York to battle the Giants head-to-head. It proved to be a costly battle but the Giants and the NFL won. The AFL lasted only one year.

In their third season in 1927, the Giants won their first NFL championship behind a defense led by tackle Steve Owen that permitted an all-time low of 20 points in 13 games. Owen became the Giants’ coach in 1930. He held the job for 23 seasons and wound up with a 153-108-17 record. He still ranks ninth in all-time coaching victories. The Giants enjoyed some of their finest seasons during the Owen years. Beginning with the start of divisional play in 1933, the Giants won eight Eastern division titles in 14 seasons and NFL championships in 1934 and 1938. Ken Strong, a triple-threat halfback and a premier placekicker, and Mel Hein, a center-linebacker who didn’t miss a game in 15 seasons, were Giants standouts through most of the 1930s and 1940s.

With the coaching of first Jim Lee Howell in the late 1950s and Allie Sherman in the early 1960s, the Giants won the NFL title in 1956 and six NFL Eastern championships in eight years from 1956 to 1963. Such stars as Y. A. Tittle, Frank Gifford, Roosevelt Brown, Emlen Tunnell and Andy Robustelli led New York’s annual chase to the title game. From 1964 to 1985, the Giants remained out of championship contention. With Bill Parcells at the helm, they won NFC Eastern division crowns in 1986, 1989 and 1990. They concluded the 1986 and 1990 campaigns with victories over Denver in Super Bowl XXI and Buffalo in Super Bowl XXV.

From the start, the Giants have been a family enterprise. Founder Tim Mara’s sons, Jack and Wellington, succeeded him and Tim Mara II served for many years as the club’s vice president. Wellington Mara and Preston Robert Tisch, who purchased 50 percent of the club in 1991, served as co-chief executive officers until their deaths in 2005. In 2007, the Giants, led by quarterback Eli Manning and defensive end Michael Strahan, defeated the previously unbeaten New England Patriots to capture the Super Bowl XLII championship. Manning and the Giants won a second Super Bowl four years later in a rematch against the Patriots in Super Bowl XLVI.