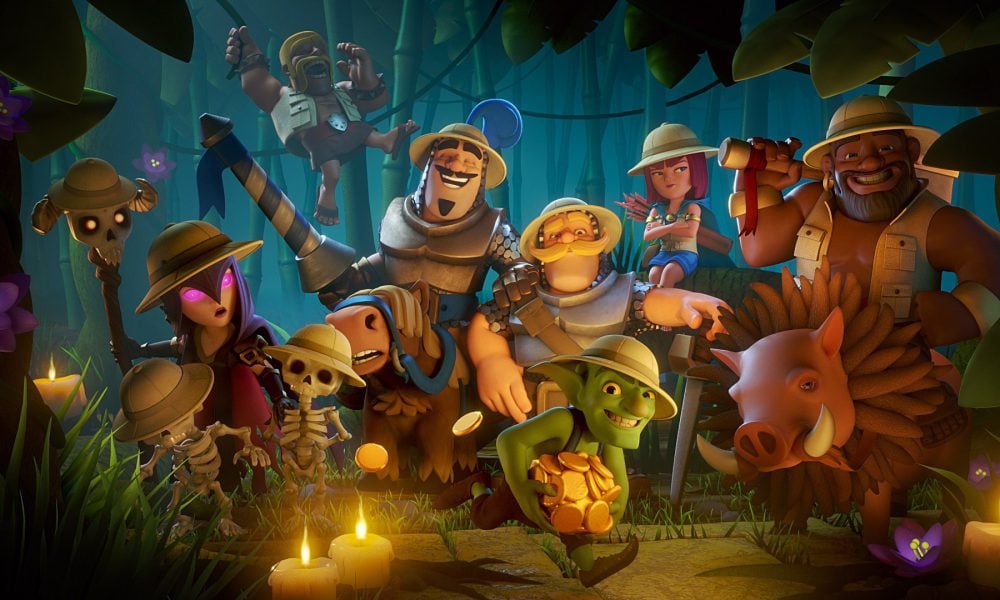 After the much-loved and great successes worldwide, Clash of Clans, Supercell announced Clash Royale, a real-time multiplayer battle game. Those who play Clash of Clans will recognize the characters in Clash Royale immediately, and most of them are in Clash of Clans. Barbarians, Archers, Goblins, Wall Destructors and many more characters were transferred to Clash Royale. In the menu consisting of 5 different screens, we can shop from the Shop part with the gems we earn from the game and with real money.

Firstly, the game is played in a vertical manner. Briefly speaking, you are creating a deck of eight cards. Among the cards there are many options such as skeletons, goblins, giants, cannons, rockets. It may take some time to find a deck that suits your gaming style. After selecting your destin, you are entering the game. There are a total of 3 towers in the middle and a main tower in the middle. Your opponent is of course also in the same way.

As in Hearthstone, you mean time, that is, your elixir is full. You can see how many potions your cards require, and you have the cards in your hands. After putting it, you don’t have control of your minions, so you need to put them at strategic points. You are trying to destroy each other’s towers with your opponent in a certain period of time. After a while, the potion in the game is speeding up and the game gets a little more complicated. Towards the end if you can even destroy a tower you are considered to have won the game.

In the Cards section, we develop the character cards and their improvements. The Clan section is active when the 3rd level is reached. In the TV Royale section, it is possible to follow the summaries of all the battles and to follow the statistics.

It’s kind of a card game. Like Magic the Gathering or Yu-Gi-Oh, it’s not a game based entirely on the card, but don’t get it wrong. Each card in the game represents a character. (And good news for Clash of Clans enthusiasts, these cards are your favorite Clash characters, so you’ll warm up too quickly.) Each card has its own Can / Mana values and features.

In the Battle part, we make 7 training battles and learn the characters and their characteristics. Then we begin to play with real opponents as multiplayer at Arena 1. There are two battle zones and when we start the game, we can place our characters before they can cross the middle area. Each character has an elixir score, and when we place these points, it falls off of us. There is a 3-minute period for each battle. If you run out of tie, the extension time is added. Here, you need to use the smart time by making smart moves.

The blue towers are yours, and the red towers are your enemies. Your goal is to destroy your characters and spells / attacks with your characters and spell cards before they destroy your towers. It’s very simple, isn’t it? Of course I can’t pass without saying that I need strategy. Because the other side will be sending you troops. Because they can be sent in two ways, you need to adjust your strategy and keep your defense and attacking in balance.

As we place characters on the battlefield, new and different characters are created in our card storage. If we have an elixir we can make fast-speed attacks. It has 3 towers on either side. Whoever knocked down most of these towers wins the game. In the beginning of the game in the first half of the field can not place characters, the enemy castle ruins, the castle around the castle is activated for us and we can place the character there. Direct from the main tower to the other towers to throw the ball and arrow is possible. We need to do defense while attacking the opponent, while attacking on the other hand.

Obviously as a play style Hearthstone, Plants vs. It is obvious that they are inspired by the productions like Zombies, but it is still possible to make matches with plenty of action. During the confrontation, we are able to send out ready-made messages to our opponent as well as funny expressions like crying smiley, smiley face. We have already seen these features at Hearthstone. The cheers and reactions of the audience in the arena during the war were thought out beautifully. In general all voices and effects are high quality.

At the end of each battle we won, the game gives us a safe box and the characters’ improvements and gold come out.   In short, the Clash Royale was really enjoyable. It is possible to make adventure-filled matches without getting bored in the online arena. Clash of Clans’ success will see whether you will achieve together.